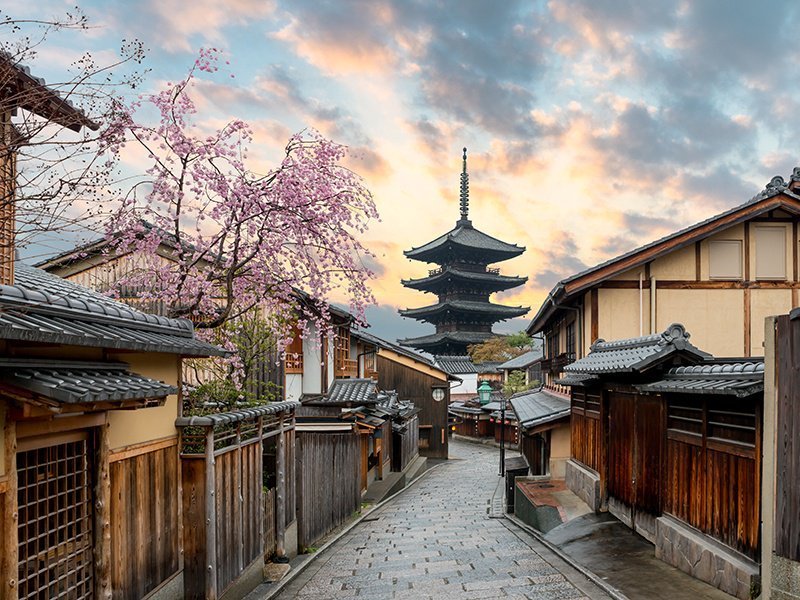 When I mention the topic of accommodation in Japan, I usually get questions about two issues: love hotels and capsule hotels. Each of these types is an important point in the message about Japan, although this is not so much due to the popularity of the phenomenon as to its bizarreness. What is said less often, and this is a pity, is the traditional Japanese architecture, a lot of which is in Kyoto, and in which one can feel as if time has stopped.

As soon as we bought tickets to Japan, I started looking for a place to sleep in Kyoto and Tokyo. I wanted to book at least one night in a traditional wooden house, where the floor is covered with tatami mats and a mattress called futon is used instead of beds.

As usual, the irreplaceable came to our aid, where we found a room in a 100-year-old traditional house in Kyoto. Interestingly, the building was built by the grandfather of the current owner and many of its elements have remained unchanged since then. In the pictures the house looked very atmospheric, so we booked one of the rooms for 2 nights.

The place of accommodation we booked was located on a side street reaching one of the main streets in Kyoto. The location was excellent because Kyoto Station, which we reached by Shinkansen from Tokyo, was a minute walk away.

In addition, there was a metro station and a shop metres away. What is more, just a walk from the place of accommodation there was one of the temples in Kyoto, Higashi Hongan-ji. Although we were about 200m from the main street, the place was really calm and quiet, both day and night.

After reaching the place we rang the bell and after a while the owner, appeared and greeted us with a smile and a few nice words. After taking off our shoes at the entrance (an important rule in many places in Japan, especially at home) we were kneeling at a low table.

He also led us to our room, which was located in the attic. After passing a series of squeaky and quite steep stairs we found ourselves upstairs, where 2 rooms and a toilet were located. We saw the place I had already dreamt about before coming to the Land of the Cherry Blossom.

A room in a traditional Japanese house in Kyoto

The room was exactly what I imagined. The first thought that came to my mind was “true, unforced minimalism”. The floor of about 15 m2 was lined with tatami mats. The room also had a clothes hanger and a table with two cushions on which you could kneel. Next to it, there was a small dressing table with a mirror. And of course, two futons, or folding mattresses for sleeping.

The owner warned us that Europeans often feel uncomfortable sleeping on such a thin mattress and said that he would give us extra if needed. We were not disturbed by the harder ground, we could also feel even more authentic atmosphere of the Japanese house.

I’ve heard many times that in Japan, paper walls are the norm and generally you can hear everything everywhere. I didn’t really want to believe it, but I found out about it the first night in Tokyo. I woke up Matthew then, thinking that someone had entered our room, but it turned out that the door was closed. These noises are the sounds of the closing toilet door on the other side of the corridor.

In this case it was similar. One of our walls was literally made of paper. Most of it was occupied by a sliding door, the wooden frame of which was filled up with some kind of parchment. What’s more, the house was old and wooden, so every passage to the toilet was clearly audible to all the people in the house.

Was this a clear minus? Not necessarily for us, because the dream is rather strong. But the sound effects added a climate that is difficult to achieve in quiet, modern buildings.

Elements that were definitely not put into the house 100 years ago are toilets and bathrooms. A visit to a Japanese toilet is often a ride without a handhold. Usually we see a powerful machine with a control panel, options for heating the board, washing and drying, of course each of them is subject to detailed adjustment.

The same was with a 100-year-old house. As far as the bathroom was concerned, it was quite basic but functional. They were located in a common space and everyone had equal access to them.

In the common space we also used a kitchen and a room with a table. In the kitchen there were basic dishes, a kettle and a microwave. The prepared meal could be eaten at a traditional table, where one usually kneels on pillows. As shoes are left at the entrance, traditional wooden flip-flops could be used to move between the room area and the bathroom at the bottom.

Price for overnight stays in Kyoto

As far as the price is concerned, accommodation in a traditional Japanese house does not differ significantly from that in a hostel. Accommodation is one of the more expensive categories in Japan and it is hard to reduce expenses.

The traditional Japanese house very much and sleeping in it turned out to be an even more interesting experience than I assumed. This is by far the most atmospheric place I have ever had the opportunity to sleep in. The smell of wood, delicate light of the lantern hanging from the ceiling, a view from the window on a tiny zen garden. All this gave this place a unique character.