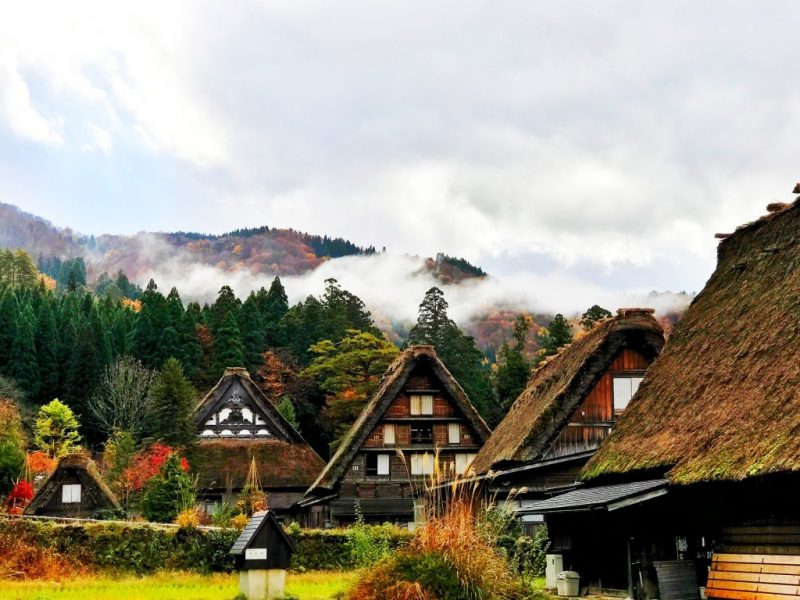 Inherited from the centuries that have shaped the History of Japan, many houses in Japan still today borrow a traditional style that gives them a very special charm. Previously of a rustic style, it was not until the Muromachi period (1333 – 1582) that wood and the first woven straw dethroned the beaten earth in traditional houses. But it is really the Edo period (1603 – 1668) that will shape the Japanese buildings that we still know today, between Genkan and Shoji.

A kingdom of good manners

Take off your shoes please! And yes, in a very large number of Japanese houses, it is customary to take off your shoes before entering the house. For this purpose, there is a recess in the room made of clay or concrete to remove your shoes: the genkan. They are then placed in a small shelf usually provided for this purpose. Step over the small platform and that’s it, you finally set foot in your Japanese house.

The floor is generally divided into 2 materials: wood and tatami. The most seasoned know that when you spend a moment in white socks in a Japanese house, they still come out all white. Proof of the irreproachable maintenance of the latter.

It is undoubtedly one of the best known elements of traditional Japanese house architecture: the Tatami. Traditionally made of woven rice straw, they invaded Japanese homes gradually from the end of the 1st millennium. In France, it is known mainly in the context of combat sports, but the traditional Tatami are a bit different.

They measure exactly 182cm long and 91cm wide and it is customary to count in Tatami. So in Japan we will not talk about a 25m2 apartment but rather an 8 Tatami apartment. The Tatami is truly part of Japanese habits and traditions. Rather green when it is new, it tends to yellow when the straw gets old. Firm enough to walk on, it is also soft and comfortable enough to lie on.

So in Tatami rooms we take tea and sleep on futons. In many modern Japanese families and homes, a room is still dedicated to Tatami. This room is sometimes used as a room for mothers to sleep with their children. At that time, there were also high decorative panels, often calligraphy or art scenes of Japanese culture.

What makes the traditional houses of Japan so charming is above all their purity, simplicity and nobility. There is no need here to hang paintings, or to put vases and trinkets to fill the place. No, everything is enough for itself. The doors are sliding and made of light wood and sheets of paper.

This paper is itself traditionally made in Japan from rice. These sliding doors (or walls) are called Shoji (not to be confused with Fusuma) and they alone embody the spirit of Japan and the traditional Japanese home. Thanks to these paper walls, light can easily penetrate everywhere in the house even when they are closed. An architecture that still inspires the greatest architects today.

The exterior of traditional Japanese houses is not to be deplored, as there are various characteristic and charming elements. For example, there are often beautiful roofs, gutters, and wooden exterior corridors that allow residents and family to walk outside while keeping their shoes off. These corridors usually lead to a beautiful Japanese garden. The whole house is usually laid out to give beautiful views of the garden if there is one.

Because yes, when you say outside, you say garden. And yes, did you know that in the past, the houses of beautiful families were laid out in such a way as to accommodate a garden within them?

The garden, which was purely Japanese in style, was usually very small and really embalmed the house with a heavenly quietness and a Zen atmosphere. It is still possible to find such houses like the tea houses in Kanazawa city. Some traditional houses also have a large garden which is not the center of the construction.

In the 20th century, the Japanese experienced several revolutions that forced them to change their way of life. A very strong demographic growth, a flight from the countryside to the cities, heavy natural disasters such as the Kobe earthquake, or a progressive opening towards the West. All this cheerful din has had the effect of considerably modifying the typical Japanese habitat.

Townhouses have become tiny, compact or have been transformed into apartments. The traditional, uncluttered architecture and design has become duller. Wood, concrete and space saving are de rigueur.

You probably know the proverb that defines Japan as a country “between tradition and modernity”. Well, this is exactly the case as far as their habitat and way of life are concerned. The most common types of houses in Japan, but there are dozens of others, and as is often the case, the reality is in the middle.

Many Japanese people live in tiny Tokyo apartments, and many others live in large and beautiful houses in the countryside. Some sleep in beds, others on futons. All this does not prevent the Japanese from having great architects who was able to transform many rooms into Art.